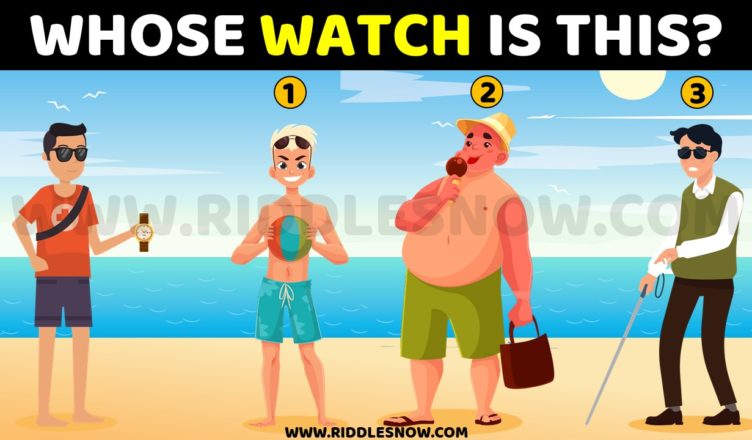 RiddlesNow found several mystery riddles for kids and adults that only a few people can figure out. Test your detective skills with these amazing riddles.

Answer: Kevin is blind, he doesn’t need a watch. Only Justin has a tan line, He is the true owner.

2. Where does the killer live?

Lisa was found dead in the dorm. The police searching the building and found a notebook. Full of information about the victim. The detective believed that it belonged to the killer. Forensic experts indicated that the author was LEFT-HANDED. The detective identified three suspects, Peter, Jenny, and Larry but they denied it. The detective searched their rooms and soon identified the killer.

Where does the killer live?

Answer: The killer is Larry because all the stuff in their room is kept on the  Left-side. Thus he is Left-handed. (see the image)

Mrs. Sophia found out that her husband was cheating on her with one of the staff. There are 3 girls working for them.

The maid who has just married to their driver. They have much debt.

The Babysitter who is very poor and bring up five kids.

The Gardner who is a university student. She is not very serious and loves partying.

Who is the lover?

Answer: The Babysitter, where did she get money for this jewelry.

A rich man was killed at his villa. His spouse found the body and called the police. The detective arrived in just half an hour. It was extremely hot and dry weather, and the Butler offered him (Detective) iced tea. After a cup of tea, the detective questioned the family and staff.

Wife Said: I was reading a book when I heard a thud.

Gardner said: I was cutting the roses. it has not rained for a month; they are dying.

Butler said: I was chopping the ice.

The owner of the house was killed with a blunt object but the weapon was never found. The detective wiped the water off his shoes and arrested the butler. Why?

Answer: Because the butler killed the owner with a large block of ice. The ice then melted.

5. Why Olivia broke up with him?

Olivia is studying in New York and her boyfriend (Daniel) is studying in Houston. He lives alone and she lives in a dorm. They love each other very much and talk to each other every day. They love to exchange photos as well. Just now Olivia received 3 photos from him! Olivia looked at them and began to cry. Olivia called him and broke up with him! WHY? (see the picture carefully)

Answer: Lipstick on a mug. Daniel lives alone, but there are two toothbrushes!riddles

It was snowing in the morning and Luke decided to have a small house party. He invited three friends to come at 11:30 AM. Emma, David, and James, when they came, they found Luke Killed and called the police. The police officer examined the body and stated that Luke was killed at 9 AM. He questioned Luke’s friend:

David said: I did not kill Luke! I was cleaning my dirty kitchen at that time.

James said:  At 9 AM I was reading a Novel at home.

Emma said: I was playing Golf with my boss all morning.

The police officer arrested one of them immediately. Who killed Luke?

Answer: The killer is Emma Because she could not play Golf because it was snowing outside.

7. How was that possible? (Mystery Riddles)

Ethan and Lily were a happy couple married for five years. One day a guest from another country visited them. Ethan Fell in love with the guest immediately. It was the face he had been seeing for a very long time. On Monday he killed and buried his wife but the next day Lily showed up with the police and Ethan realized he had killed the guest instead.

How was that possible? riddles mystery

Answer: The guest was Lily’s twin sister who lived abroad, Ethan never met her before.

8. Where is his lunch hidden?

Ava had a fight with her husband and decided to play a trick on him. She cooked lunch and hide it somewhere in the house. She wrote him a note saying that he had only one chance to guess where the lunch was. There are four notes and only one of them is true.

The note on the fridge says: it’s either in the oven or in the washer.

Microwave note says: Your lunch is not here.

Washing machine note says: it’s either in the fridge or in the microwave.

Where is his lunch hidden?

Answer: it’s in the microwave.

9. How did she survive? (Riddles Mystery)

A couple of Ava and Noah has just had a meal. Ava offered her husband an apple, but he refused. she cut the apple into 2, So both ate half of it. as soon as he ate it, he died and his wife survive. How did she survive?

Answer: The poison was on one edge of the knife. When she cut the apple, only half of it was poisoned.

You have mastered a magic spell, Which can immediately heal one person. one day walking along the street you came across three injured people: riddles mystery

A child with a cut on his leg.

A stranger with a bullet injury in the chest.

Your friend is beaten by a Viper.

Who would you save?

Answer: The Boy’s leg cut is just a small cut, which doesn’t threaten his life.

You have about an hour to deliver your friend to the hospital.

The man may die before the ambulance arrives so you should save him first.

The power was out all over the town. Tim was in the hospital that day. He had to be out soon. When the power was back on, The nurse entered the room and found Tim stabbed to death. The police questioned four suspects. Nurse, Cleaning lady, Doctor, and Tim’s wife.

The nurse said: I was in the Doctor’s lounge until the power was on.

Cleaning Lady: I was having tea in the staff room.

Doctor: I was speaking to a patient.

Tim’s Wife: I was buying food at the vending machine.

Answer: The killer is Tim’s Wife because the machine is powered by electricity, so she could not have been buying food.

So, guys how many mystery riddles did you solve, please tell us in the comment box below and share these amazing detective riddles with your friends to check their intelligence. mystery riddles