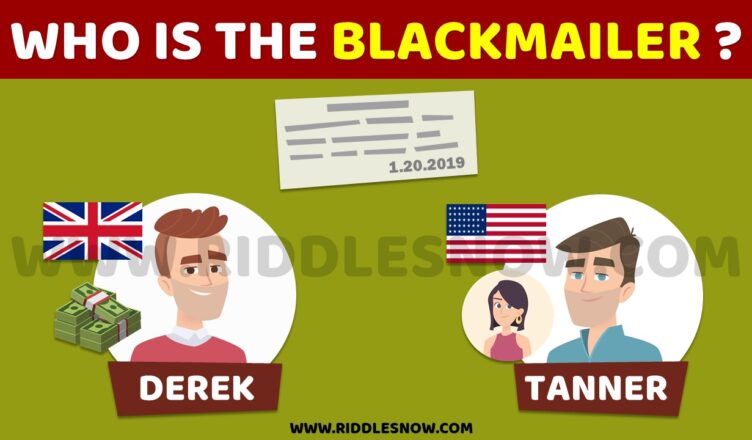 Here is a cool set of 12 Riddles To Solve that each adult will fail to solve! Do you need to examine your expertise and attempt to remedy all these riddles properly? Let’s see, possibly you are the smartest right here 😉

Turn your logic on and provides your mind an excellent exercise with these 12 Riddles To Solve and brainy puzzles!

James decided to throw a party on the 31st of October. All his friends put on cool costumes.

Andrew dressed up as Freddy Krueger

Amelia put on the costume of Morticia Addams

At midnight, Sofia was found dead. James had to call the police, though he already knew who the killer was.

Who is the killer? (See the picture carefully)

Answer: See the finger marks on Sofia’s neck, only Amelia could do it. The boys had gloves on their hands. Which were not so easy to take off and put back on quickly.

Julia Brown was a famous supermodel. One day she was found dead right before her photo shoot. The police arrived at the studio, examined the room, and soon identified three suspects.

Maya, Photographer: Why would I kill Jessica? We were having another photoshoot the next week.

Lucy, Costume designer: She was my best friend since childhood! She even gave me this job.

Mark, Boyfriend: We had a fight yesterday but made up already!

The police examined the body and guessed who the killer was.

Who is the killer? (See the picture carefully)

Answer: The killer is Lucy. See the needle near her legs. Lucy was jealous of Julia’s success.

3. HOW DID HE KNOW THAT THE MAN WAS LYING?

On Tuesday morning, a man came to see detective Gonzalez.

Detective: Show me where it happened.

Man: Here! my wife and I left the car and went to watch the show. When we came back, It was gone!

Detective: Was your car insured?

Man: Of course, I hope they will pay me off!

Detective: I hope they won’t believe your lie.

How did he know that the man was lying? (See the picture carefully)

Answer: See the board of theater “NO SHOW ON MONDAY” and today is Tuesday, so yesterday was Monday. There are no shows on Monday. It seems the man faked the theft.

Jane was killed in her own apartment. The detective searched the apartment and figured out there was another woman that evening. The detective interviewed Jane’s friends.

Detective: What did you do last evening?

Claire: I took my car to the car wash.

Stephany: I went to the hairdressers.

The detective decided to investigate his own way and he went to the car cleaner and hairdresser and ask:

Detective to the Car cleaner: Did Claire come to you to wash the car yesterday?

Detective to Hairdresser: Did Stephany come to your shop yesterday?

Hairdresser: Let me check! Yes, Stephany was on the list yesterday. I went home earlier, I don’t know if she came or not.

Detective: What was she going to do?

Hairdresser: To curly her hair.

Answer: The killer is Stephany, See her hair is still straight. She did not go to the hairdresser’s yesterday.

A rich man named Mr. drake liked gardening in his spare time. One day his maid found him dead right in the garden. The detective came and interviewed all the staff.

Maid: I was taking out the garbage and saw him lying dead.

Driver: Mr. Drake asked me to get his car out. I was in the garage.

Cook: I was cleaning the kitchen and was about to leave after that.

Answer: The killer is Driver see He got his shoes dirty in the mud when killing Mr. Drake on the patch.

Mason was found dead in the forest. The detective examined the body and found out that he was strangled. There were fingerprints on his neck. The murder happened on Halloween.

There must be a lot of evil sprites in the forest. The detective narrowed his suspect pool down to:

William, A Zombie and

Answer: The killer is William, A Zombie because he is the only one who could leave fingerprints.

There was a bank robbery. The police surrounded the bank before the criminal managed to escape. He took hostages and hide in the toilet together with them.

After negotiations with the police, The hostages were released. The criminal tried to escape and was caught.

But when the policeman made him take off the mask, They realized that they got the wrong one.

Answer: The criminal made a hostage put on the second mask and run. Then he left the bank with the released hostages.

Other Riddles: crime riddles with answers

The children came to class and found their teacher, Mr. Jackson, dead. Detective Gonzalez and forensic experts arrived to investigate this case. The detective examined the body. He was hit in the head with a dumbbell. The detective interviewed all the teachers.

Math Teacher: I have flown in from vacation this morning. I don’t know who could kill him.

PE Teacher: He was my friend. Why would I kill him?

Chemistry Teacher: I go jogging and exercise in the morning so I couldn’t come to work at once.

Biology Teacher: I was drinking coffee in the cafeteria, You can ask the barista.

Answer: The killer is a Chemistry teacher because there is only one dumbbell in his house. Where is the second one? see

9. WHO KILLED THE WOMAN?

A British woman was murdered at noon on Christmas day. The detective questioned 4 suspects. about what they were doing that day.

Suspect 1: I was in the hospital with my wife. She gave birth to our son!

Suspect 2: I don’t remember exactly but I am sure I was not killing anybody.

Suspect 3: I hadn’t bought presents, so I was shopping at the mall.

Suspect 4: I was walking my dog like I do every other day at noon.

Who killed the woman?

Answer: The killer is Suspect 3 because all malls are closed at Christmas.

The city is suffering from a terrible drought. There has long been no rain in the area, and all the rivers have dried up. There is also difficulty in finding drinking water.

One day a student was killed in school. The police identified four suspects.

Teacher: I was in the cafeteria.

Coach: I was training the football team.

Cleaner: I was mopping the floor.

Classmate: I was in the lab.

Answer: The killer is CLEANER because there was no water in the city. She could not mop the floor.

11. WHO IS THE BLACKMAILER?

Luis was found dead in his house. The police suspect suicide. They found the letter at the scene. It was unsigned with a date in it.

Police: Someone was blackmailing Luis. Do you suspect anyone?

Luis’s wife: Yes, his business partners. Both had a motive.

One of them is from the U.K., His name’s Derek. Luis owed him a lot of money.

The second one, Tanner, is from the U.S.A. Luis once had an affair with his wife.

Who is the blackmailer? (See the picture carefully)

Answer: The blackmailer is Tanner because he is from the USA. If you see the letter carefully, You will see  MM/DD/YYYY is the American date format.

Mike’s body was found in the morning after the beach party. One of the guests called the police. The examination confirmed that Mike was poisoned. The police interrogated 3 suspects.

Waiter: I was helping the cooks.

Bartender: I was helping the guests with their coats.

Guard: I was in charge of security, I didn’t see anything.

The police immediately arrested the murderer.

Answer: The killer is Bartender. It was a beach party, they did not have coats.

Other Riddles: Riddles to solve