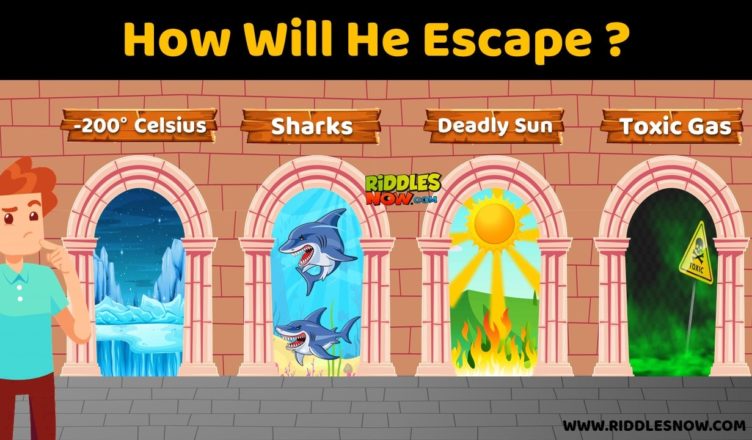 Hello Guys, I’m here with a brand new 12 Escape Room Riddles to check your wits and survival skills. Try to solve the following 12 riddles and write down your results at the end. You can see how nicely you did but I should warn you, you’ll need to do your best to avoid all the traps. Good luck guys!! escape room

1. A Problem in The Jungle 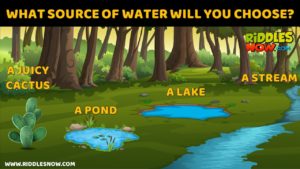 You are travelling through the jungle all on your own one morning. You find out that you’re almost out of the water, you can get more water from one of four sources: escape room

a pond with salty seawater,

a clear still lake or

What source of water will you select to fill your filter water bottle?

Most cacti are toxic and instead of quenching your thirst you’ll have a severe stomachache. Salty seawater will dehydrate you, stagnant water in the still lake is swarming with all kinds of bacteria and drinking. It is extremely dangerous so your best choice would be the silty stream. It contains nothing your filter water bottle can’t neutralize. 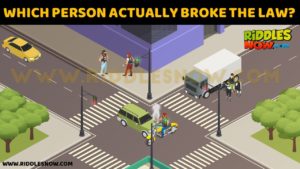 A truck, a man riding a horse and a motorcyclist are waiting on the road for the green light. All of the sudden the driver of the truck drops his mobile phone on the horn of the truck, the loud noise scares the horse and it bites the motorcyclist’s ear. Shocked and in pain the man unwittingly moves his motorcycle and causes an accident but which person actually broke the law?

It’s the motorcyclist because he isn’t wearing a helmet while driving. 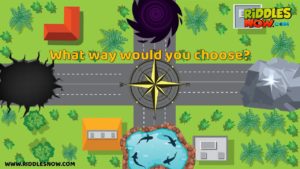 You are lost in the forest. It is getting dark and very soon wild animals will start their hunt. There are 4 roads you can choose from the north, south, west, and east but

the north path will take you to the giant black hole ready to swallow you up.

The South Road goes through a lake full of huge whale sharks.

If you take the West Road you will end up at the edge of a ginormous hole in the ground which can’t be crossed even with the help of a rope and the east path will take you to a sky-high Mountain which is impossible to climb over.

What way would you choose? escape room

You need to follow the South Road. Whale sharks present no threat to people and they will let you swim across the lake without any problems.

4. Trapped By a Psycho 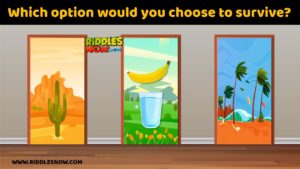 A psycho caught you and let you choose where you would have to stay on your own for the following three weeks. If you manage to survive he’ll set you free. He gave you three options: escape room

a desert full of cacti,

a sunny field with flowers, a banana and a glass of water and

a beach under stormy skies surrounded by sharp rocks and hit by high waves.

Which option would you choose to survive?

In a desert, there’s no water and you won’t last long. One banana and a glass of water won’t help you to survive for three weeks. Your only selection is the beach, the ocean will give you food and since the weather is cloudy you’ll be able to drink rainwater. 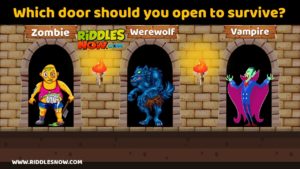 One night you will find yourself stuck in an old spooky castle. You hear someone chasing after you and you run faster and faster but suddenly a deaden however as your eyes adjust you notice 3 doors in the wall but behind each door, there are some terrifying creatures escape room

Werewolves are behind the second one and

if you open the third door you will come face-to-face with bloodthirsty vampires.

Which door should you open to survive?

Escaped through the second door because the moon is waxing at the moment and werewolves only transform during a full moon. 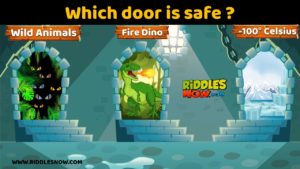 You’re kidnapped and held in a basement by a maniac professor but the basement has three doors and one of them leads to freedom. The professor leaves and you get to open the doors one after the other:

On the other side of the 1st door, there’s a dense jungle full of deadly creatures,

behind the 3rd door, you see a lake of ice water that freezes everything in several seconds.

How can you escape?

Walk out through the second door because dinosaurs can’t breathe fire.

So, how do you feel to solving these escape room puzzles tell us in the comments box. let’s move into next riddles.

David and John played in the Attic where it was dark and dirty but when they came down, only David’s face was covered in dust while John’s face was miraculously clean however it was John who went and washed his face. You have to figure out why John looked at David’s face and thought that he was dirty too at the same time?

When David looked at John whose face was spotless, he decided he was just as clean. 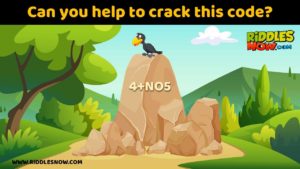 A treasure hunter got lost in a forest but after he had been walking for some time he noticed across the road with a big stone in the middle. There was a word on this stone which read 4+no5. The man realized that the sign must be showing the direction toward the treasure but it was written in some tricky code. Can you help the treasure hunter to crack the code?

The man should turn the note upside down then it will read “south” that is where the treasure is.

9. An Escape From a Locked House 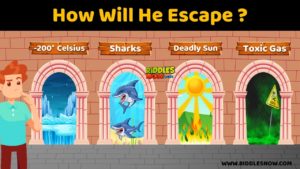 You got kidnapped and locked in a stone house however there are four doors you can escape through but behind the first door it’s extreme deadly cold and if you choose to go that way you’ll turn into a block of ice in a matter of seconds,

the second door opens into a water tank swarming with hungry sharks,

On the other side of the third door, the Sun shines so brightly that it burns everything in no time and the room

behind the fourth door is full of poisonous gas that will not let you breathe.

Is there a way to escape?

Wait until the evening when the sun goes down and escape through the third door.

Did you solve this escape room riddle, tell us in the comments?

One day Lucas was caught by a maniac and thrown into a 20-foot deep pit. The maniac informed him that in 5 minutes the pit would begin to fill with water. Lucas was horror-struck because he can’t swim. He looked around and noticed that in the bottom of the pit there was a six-foot long rope, a four-foot tall wooden barrel and a three-foot tall metal safe. Lucas himself was six feet tall. How could Lucas use these objects to get out of the pit alive?

Lucas should hold on to the barrel when the water starts to rise it’ll help him to stay afloat and take him to the surface.

look at this picture ten minutes before it was taken. Someone from this photo had stolen all the money from the cafe on the beach however all these people claimed that none of them had visited the cafe in the last 10 minutes. Who’s the thief? 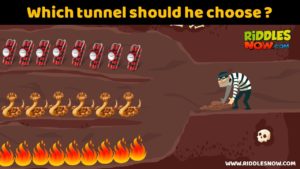 Ethan escaped from prison by digging a long tunnel in the floor of his cell, he’d been crawling through the underground tunnel for three hours. When he saw that the main tunnel divided into 3 smaller ones but the first one was on fire and the second tunnel was home to a nest of venomous snakes, and the next third tunnel was set with explosives bomb.

How can Ethan escape?

Ethan should opt for the first tunnel. He can walk through it after he puts out the fire with dust.

And now let’s get down to the part you’ve been waiting for so:

if your result is 0 to 4 correct answers it’s time to read some books that will help you master the art of survival or you can just watch more Videos like this and you’ll definitely get better.

if you crack 5 to 8 Escape Room Riddles. You’re almost there just a little bit more effort in practice and you’ll be able to get out of almost any dangerous situation and if you manage to get through.

9 to 12 difficult situations unscathed which of course is better than being scathed you’re a master of survival and logical thinking. When your friends have a serious problem you’re the one they come to for advice.

Hey, if you learn something new about yourself today then give this Escape Room Riddles Article alike and share it with a friend and here are some other Riddles I think you’ll enjoy.