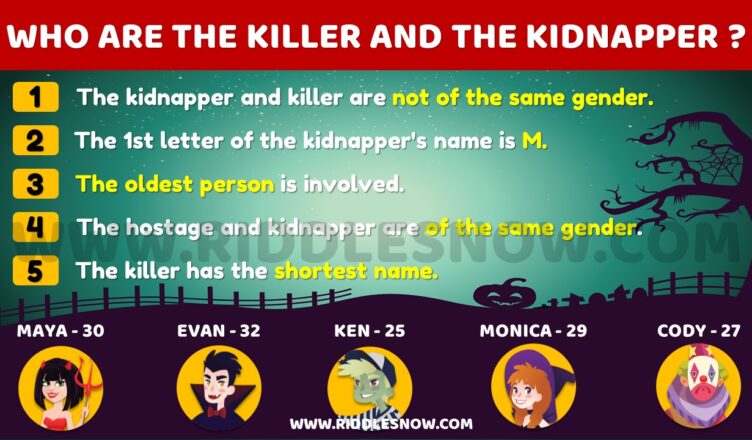 10 creepy Halloween riddles and brain teasers with answers that can check your logic! Try to resolve these creepy and mysterious logical puzzles utilizing your thoughts and IQ.

These Halloween riddles and brain teasers will make your thoughts do workout routines. Everyone will discover one thing to get pleasure from detective or crime, easy or difficult – this finest riddles and puzzles.

Try to guess every mind game and train your self.

1. WHAT SCARED THEM SO MUCH?

Ryan, John, Lily, and Ella Traveled around the country. One day they saw an abandoned house by the road.

Lily said: Looks like a ghost house! Let’s check it!

They all walked around the house talking polaroids but did not meet any ghosts in the house.

Her Friends said to Lily: We told you! There are no ghosts.

Lily: Look at these pictures!

Friends see the pictures and said: Oh no, get out of here!

Friends: It’s not about your joke!

What scared them so much? (See the picture carefully)

Answer: See photo 1 if all of them are in the photo. Then who took the picture?

2. WHO KILLED THE EDGAR?

You found your friend Vampire Edgar in the bathroom with a stake through his heart. His roommates rushed to see what was going on.  You suspect one of them to be an undercover Vampire hunter.

Gabriella: It could not have been me. I was drinking the blood of my rival when I heard your scream.

Colton: I could not have killed, I was sleeping in my coffin!

Marcus: I was shaving when I heard you screaming. I glanced back into the mirror and saw a shadow run past. Maybe it was the murderer?

Who killed the Edgar? (See the picture carefully)

Answer: The killer is Marcus because a vampire doesn’t have a reflection. Why was he shaving in front of the mirror?

Wilsons’ house was robbed at night. They called the police. The police come and ask what has been stolen.

Mrs. Wilson: They even ate our garlic soup and drank the milk!

Mr. Wilson: They even stole my new shoes!

The Wilsons’ suspects their neighbors:

Who is the robber? (See the picture carefully)

Answer: The robber is Cannibal Frank because a vampire would not steal the silver or the garlic soup. A wolfman doesn’t need shoes.

4. WHICH DOOR WOULD YOU CHOOSE?

You turned into the Vampire but this is the least of your concerns. You are locked up in an abandoned house church. To escape, you have to pass through one of the rooms equipped with sensors.

1st room with Motion sensors: As you enter the room holy water will flow from the ceiling. One drop – and you are dead!

2nd room with Body heat sensor: If it changes by at least 1 degree you will be burnt.

3rd room with Sound sensors: As soon as activated the room will be filled up with Garlic. You will die immediately!

Which door would you choose? (See the picture carefully)

Answer: You should choose the 2nd room because The Vampire is a cold-blooded creature. You won’t change the temperature in the room.

5. HOW DID ABBY UNDERSTAND HE WAS A VAMPIRE?

Abby got lost in the forest. She tries to find a way out till night. Finally, she came across a house and decided to ask for help. A nice old man opened the door and let her in.

Old man: I have been living here for many years and I know the forest well. In the morning I will show you the way, and now you should have a rest. Let me show you your room.

Abby: Oh no, he is a Vampire! I need to escape!

How did Abby understand he was a Vampire? (See the picture carefully)

6. WHERE DID HE DISAPPEAR TO?

Milo loves Vampire movies. Today he is watching a very exciting one! Suddenly a Vampire jumped out of the TV right into Milo’s room!

However, Milo did not lose his head. He ran for the aspen stake hidden in the kitchen. The Vampire ran after him. Milo ran to the terrace, The Vampire kept up.

Milo braced himself for a fight and turned around but the vampire was gone!

Where did he disappear to? (See the picture carefully)

Answer: It was during the day. When the Vampire ran to the terrace, the sun killed him.

Tony turned into a vampire! He got bitten today in the evening.

Tony thinks: How can I get home? They will immediately understand who I am? but today, mom is cooking a chic dinner. I will go and hide somewhere in the corner.

Tony arrives at his house and sits down to have food. The dinner was really fancy! There were the most expensive dishes and delicious Turkey.

As soon as he ate a dish with the spoon. Suddenly, Tony’s throat began to choke during dinner.

but Tony died before the ambulance arrived.

Why? (See the picture carefully)

8. WHO ARE THE KILLER AND KIDNAPPER?

5 People got a Halloween party.

Ken – 25 dressed up as Frankenstein, and

You have a few clues to find them:-

1. The kidnapper and killer are not of the same gender.

2. The 1st letter of the kidnapper’s name is M.

3. The oldest person is involved.

4. The hostage and kidnapper are of the same gender.

5. The killer has the shortest name.

Who are the killer and the kidnapper?

Answer: Cody is not involved in anything.

The killer has the shortest name so KEN is the killer.

Maya and Monica can be kidnappers but the hostage and the kidnapper are of the same gender.

Monica is the kidnapper.

9. WHICH TWO SHOULD HE CHOOSE?

Peter woke up early and had breakfast. He wanted to go shopping that morning. He lived in a mythical town full of supernatural creatures.

There were Vampires, Werewolves, and Zombies. These creatures were not friendly at all. Each time Peter left the house he had to protect himself. His backpack was small and could only carry 2 weapons.

Here’s what Peter had:

A gun with silver bullets,

Which two should he choose?

Answer: You can’t kill a zombie, it’s already dead. That’s why you need the Buzzsaw.

Garlic will protect you from Vampires.

and Werewolves are harmless in the daytime.

10. WHAT METHOD DID HE CHOOSE?

Sam went to a magic school. The teachers, staff, and students were all magical creatures. He was a student, all the teachers loved him. He could conjure any spell, no matter how hard.

One time, a teacher asked the students to figure out how to give eternal life to a regular human without using a single spell! Sam was so talented that he immediately raised his hand and gave an amazing answer.

The teacher was stunned by his quick thinking!

What method did he choose?

Answer: One of the school staff (Vampire) should bite the human, and he would become immortal!

Other Riddles: Halloween riddles with answers

So, how many Halloween riddles with answers did you solve? please tell us in the comment box and SHARE these tricky riddles, scary and creepy riddles, and riddles to solve, with your family and relatives.