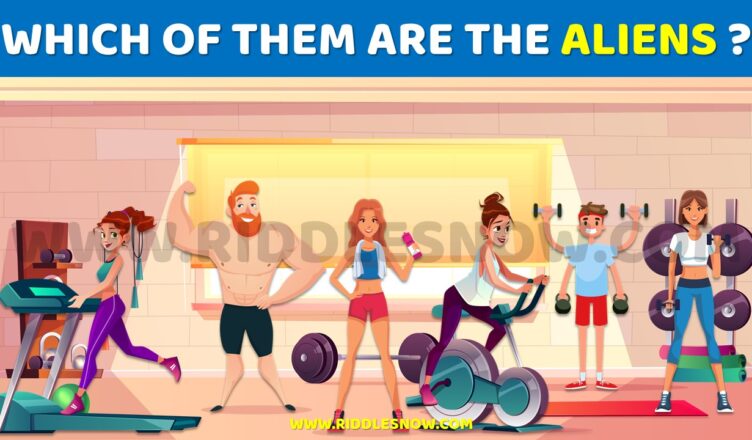 Turn your logic on with this huge set of 12 Tricky Riddles With Answers For Kids And Adults! These riddles will work out your brain and assist you to stay concentrated during the day! If you are feeling bored or exhausted, try these cool riddles to get up your brain:

Mrs. Emma was a young principal. She decided to get rid of all thefts that were frequent there. Someone stole phones and no teacher could figure out who he or she was. Mrs. Emma started to carefully watch all students. After another theft, Mrs. Emma suspected several students and asked them about what they were doing during the theft.

Mason: I got sick and had to leave my last lesson.

William: I had my Dutch lesson. I am going to Denmark with my parents next week.

Jayden: I went to an extra Baseball lesson.

Mrs. Emma immediately realized that one of the students was lying.

Answer: William was lying. He said that he studied Dutch because of his trip to Denmark but it’s Danish that is spoken in Denmark.

Ethan stayed late in the library. Finally, he was about to head home. He was walking along the dark hall. When he heard someone screaming. HELP! HELP! I’m HERE!

Noah: I have no idea! I went to the cafeteria but it was closed today. I decided to go home. When someone put the garbage bag on my head and closed me here.

Ethan: I will find out who did it!

In the morning, Ethan interrogated all his classmates.

Daniel: I was doing my homework in the classroom.

Lily: I was with Daniel, but I went home earlier.

Aiden: I was sick yesterday.

Sofia: I had lunch in the cafeteria and then went to play tennis.

Who locked up Noah?

Answer: Sofia is lying. The cafeteria was closed yesterday.

A luxurious cruise liner was going to Hawaii. One day the ship got into a terrible storm. When the storm was already over. A maid found a man lying unconscious in his cabin. The maid woke him up and the man told her what had happened?

I was here when the storm started. Suddenly A man broke open the door. He hit me in the head and I passed out. I think he was a robber. That’s right, my wallet and iPhone are gone.

The maid called a security guard. The Guard identified three suspects and questions them.

Security Guard: What were you doing during the storm?

David: I was sick and spent all the time in the bathroom.

Logan: I was listening to music in my cabin.

Ryan: I was doing barbell squats in the gym.

Who robbed the man?

Answer: Ryan. It’s impossible to do barbell squats during a storm.

4. HOW DID JOHN MAKE THEM GO AWAY FOR GOOD?

The mafia has been growing stronger in Italy this year. Just last week, a small store closed because the mob wanted too much money from the owner, a poor old lady.

John runs a small vet clinic in Sicily. He moved from the US to marry the beautiful Anna. One day the mob came to his clinic demanding money. John did not want to pay and came up with a plan.

Next time the mob came, John met them with a huge dog. But of course, the mob was armed. After 5 minutes the mob left John in peace and never came back.

How did John make them go away for good? (See The Picture Carefully)

Answer: John informed the mob that he was also an Interpol employee, and they decide to leave him alone.

5. WHICH OF THESE ARE ALIENS?

A flying saucer landed on the roof of a fitness center. The passers-by saw two aliens getting of the saucer and entering the fitness center. An FBI agent came soon and questioned the coach.

Coach: I have not seen any Aliens here. Those witnesses are insane!

FBI Agent: They can look like humans. Let me have a look.

The detective went right to the gym.

Which of these are Aliens? (See The Picture Carefully)

Answer: If you will see the picture carefully, you will see one man has 4 nipples and another man have four hands.

6. WHY POLICE DETAIN THE GIRL?

It was snowing hard that winter. One day a policeman whose name is Paul was patrolling the block. There he saw a woman looking suspicious. She was carrying two bags full of some stuff.

Policeman: What do you have in your bags?

Woman: It’s some donation stuff… clothes and shoes, you know.

However, the Policeman detained the girl.

Why? (See The Picture Carefully)

Answer: She left the house through the window after robbing it. If she lives there, she’d rather use the door.

Other Riddles: Tricky Riddles With Answers For Kids

Henry had a fight with his parents and rode away. He did not return home in the evening and his parents decided that he was kidnapped. They went to the police to file a kidnapping.

Police: It’s too early to open an investigation. GO HOME! Your son will be back soon.

Henry’s Parents decided to walk around the neighborhood and look for witnesses. All people said they hadn’t seen anything. But Henry’s parents were sure that one of them was the kidnapper.

Answer: Option A is a kidnapper! see Henry’s Bike.

8. WHICH ONE WOULD YOU CHOOSE?

You are captured by the evil queen. Who wants to kill you. She has water animals and lets you. Choose your own death.

She can throw you:

1. Into the ocean with Sharks,

2. Into the sea with Piranhas,

3. Into the river with Hippos.

Which one would you choose?

Answer: You should choose the sea with Pirhanas because piranhas don’t live in salty water.

It’s exam week at Hilston University. Four students decided to make friends. With a professor before the exam, maybe he would grade them more gently. the Students learned that he had one weakness. He was obsessed with Africa.

At the break, The students came up to him and began telling him their own stories about Africa:

Carter, Traveler: Unfortunately, so far I’ve only been to the North of Africa.

Evan, blogger: I love photography, last time in the Sahara I got some great Kangaroo shots.

Robert, Volunteer: I am so excited to volunteer in West Africa this summer!

Kevin, Research Assistant: I help at the zoo and often travel to Africa. Once I saved the life of a baby Elephant.

Answer: EVAN, Blogger is lying because kangaroos only live in Australia.

David went to the bar with his friends. They chatted, laughed, and took lots of selfies. All of them left the bar at about 8 pm and went in different directions. In an hour, David was found dead not far from the bar. The police questioned the friends.

Police: who was with Adam that evening.

But all of them denied their guilt. Then the policeman looked through the photos taken at the bar and identified the killer right away.

Answer: The killer is JAXON. if you see the picture carefully you would see that David tried to protect himself and broke Jaxon’s glasses! That’s why Jaxon had to put on another pair.

Two arch animes, Alex and Max, met each other one day and a Genie appeared among them. He granted three wishes to Alex and one wish to Max.

Max wished: “Give me twice of whatever Alex asks for.”

First, Alex wished for a bag with money, and Max got two bags.

Then, Alex asked for a plane, and Max got Two planes.

After the third wish, Max died.

What was the third wish?

Answer: Alex asked the genie to beat him half of death.

There was a famous haunted place in one town. A group of friends went there to check. If there was really anything weird about it. When they walked up to the building, one of them point-blank refused to enter it.

But they ignored his words and enter the house and after that, they didn’t come out.

What was wrong there? (See The Picture Carefully)

Answer: There were loads of footprints leading into the house, but none of them led out.

Other Riddles: Tricky Riddles With Answers For Kids

Did you solve these top 12 Tricky Riddles With Answers For Kids And Adults that puzzled the world!

Some research has proven that people who solve different riddles every day have a higher IQ score than others. So, if you wish to enhance your logical abilities, start doing it too! 😉

Don’t forget to SHARE these Tricky Riddles to your friends and family, and solve these enjoyable brain teasers together!