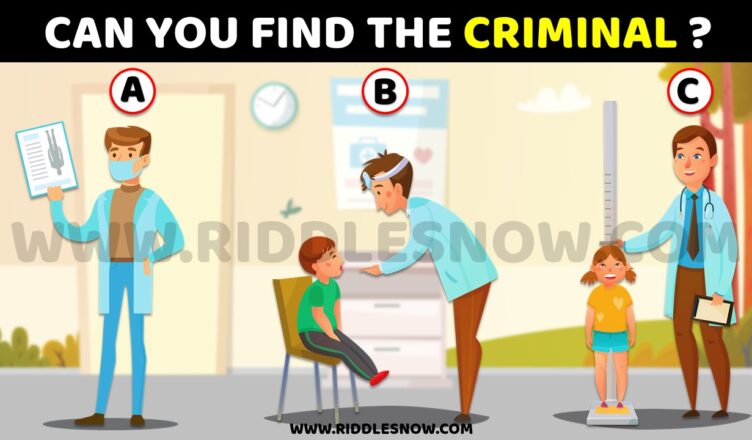 Are your courageous sufficient to resolve these 15 riddles with answers hard that may make your mind sweat? These hard puzzles will work out your mind and enable you keep concentrated through the day. Solving difficult riddles for 20 minutes a day makes you good and extra attentive to the main points! So make sure to test these riddles with answers hard out and share your solutions within the comments:

1. CAN YOU FIND THE CRIMINAL?

One day a dangerous criminal escaped from prison. The guards followed him and almost caught but the criminal snuck into a hospital and pretended to be one of the doctors. The guards ran into the emergency room and spotted the criminal right away.

Can you find the criminal? (see the picture)

Answer: The criminal is “A” because he is holding it upside down.

2. WHO IS THE LIKELIEST SUSPECT?

Alyssa was found dead in her house. Dying, she wrote a question mark and ‘STONE’ with her blood. The police decided to interview the Stone family next door.

Steven: I was watching TV and heard nothing.

Eliana: I was painting in the attic.

John: I was looking for my missing dog in downtown.

Mark: I also looking for the dog in the park.

Who is the likeliest suspect?

Answer: The murderer is MARK because the clue says: “QUESTION MARK STONE”.

A rich woman Mrs. Elisa was found dead in her house. Medical examination showed that the woman had been killed last night. Sheriff Darrell questioned everyone in the house and found three supects.

Cook said: I went to a store, cooked dinner, and then clean the kitchen.

Ally, Daughter said: I was at my friend’s birthday party.

Maid said: I went to pick up dry cleaning. I had to go across town, so it took the whole evening.

Answer: The murderer is Maid because Mrs. Elisa was killed on september 15. The mais lied about picking up the dry cleaning that day.

Maya was strangled in her apartment. The police managed to find a witness. His name is John.

John said to the police: My name is John. I was passing by and accidentally saw a man strangling a woman. Both of them were facing the other way and didn’t see me. I called the police immediately, but you came too late.

The police didn’t believe John. Why?

Answer: He said they were standing back to him but the marks on her neck show that the killer was facing the victim.

Maya’s friends gave her a birthday party! They decorated the house, bought drinks and snacks, and invited all Maya’s close ones. At the end of the party, Maya was found dead right under the lights. The police believed that three guests had a motive.

Pamela: We used to be competitive at school but then we became best friends!

Jaxson: I forgave her cheating on me long time ago.

Nora: She stole my boyfriend, but I don’t hold it against her.

Answer: The killer is Pamela. Maya broke the bulbs to leave the clue.

6. CAN YOU READ THE NOTICE?

Leo and Maci were going home. Through a large park at night. Suddenly Maci noticed something strange on the bench.

Maci: it’s a man! Let’s check if it’s something wrong with him.

Leo: He is dead I am calling the police!

A detective examined the body and found a note. seems like the next victims’ names encrypted!

Can you read the notice? (see the picture carefully)

Answer: It is written on the notice that “SHON AND ROBERT WILL BE THE NEXT I AM NOT AFRAID”.

Emely was found dead in the laundry late at night. The police examined the scene and interviewed the people. Who came to the laundry last night.

Katie: I came at 7:30 pm. There were no other visitors in the laundry. When I was about to leave, another woman came.

Lexi: I came at 8:15 pm. there was nothing special about that day, I just washed my clothes and left.

Mrs. June: I am blind. I don’t know if there was a body when I came in or not.

Answer: The killer is Lexi because Emely was trying to protect to herself, Emely ripped off an earring from her ear.

Other Riddles: riddles with answers hard

A famous model was killed during her photoshoot. The autopsy revealed that she was poisoned. She did not eat or drink anything but the food everyone at the studio ate. The police questioned everyone there.

Photographer: I was taking pictures of her all day long.

Model: I was preparing for my own photoshoot. I was putting on makeup with my own stuff.

Make-up artist: I just did her face and hair. I didn’t offer her any food or drinks.

Who poisoned her? (see the picture carefully)

Answer: Make-up artist is killer. He added poison to her lipstick.

On Christmas eve, a lady’s hotel room was robbed. The lady immediately reported the loss in receptionist. There was a detective staying at the same hotel. He inspected the crime scene.

Detective: Have you seen the robber?

Lady: No, he broke into the room when I was out.

The Detective questioned the three suspects.

Suspect 1: I was trying to get some coffee downstairs. This hand is such a nuisance!

Suspect 2: I was arguing with the hotel manager. I saw nothing.

Suspect 3: I had been partying hard, so I tried to sleep.

Who is the robber? (see the picture carefully)

Answer: The robber is suspect 1 because the bandage is put over the jacket, so it’s fake.

Billy worked as a salesman in a car dealership. On Christmas eve, He was found dead in the backroom. The police identified three suspects.

Anna, Manager: I had a long talk with a disgruntled customer. When I hand up, Billy had already been dead.

Henry, salesman: I was concluding a contract with a client at the front desk.

Thomas, Head of sales: I was across town meeting with a client.

Answer: The killer is Henry. He concluded this contract two days before.

Four friends went sunbathing poolside. After a while, Hope was found dead in the locker room. The police interviewed Hope’s friends.

Sophia said: I went to buy drinks for all of us.

Emma said: I was swimming in the pool.

Grace said: I was sleeping in the hammock.

Answer: The killer is Sophia. Why did she buy three drinks instead of four?

12. HOW DID THE OTHER MEN SURVIVE?

Four friends were on vacation at the seaside. They rented a villa right by the sea. When they arrived, the hostess offered them a cake and drinks. The cake was delicious! suddenly two of the friends died. The police found poison in their bodies.

How did the other men survive? (see the picture carefully)

Answer: The coffee was poisoned.

An old man lived alone in the Suburbs. It was Friday when the mailman was passing by; He looked into the window and saw him in a pool of blood. The policeman found Tuesday’s newspaper, 2 bottles of warm milk, and 1 bottle of cold milk. The killer was arrested the next day. Who is it?

Answer: The killer is a Mailman. He knew that the old man would not need a newspaper on Wednesday or Thursday.

The police found the dead body of a woman who hanged herself. The room has no windows and no furniture. There’s just a puddle of water on the floor.

How did she hang herself?

Answer: The room is a walk-in freezer. She used a big ice slab to hang herself.

A detective went missing. He left a code for the police, Which tells who the criminal is?

There are three suspects: JOSE, BILL, and ALAN.

Who is the criminal?

Answer: The criminal is BILL. If you reverse the line you will get the answer “BILL IS BOSS HE SELLS OIL”.

Other Riddles: RIDDLES WITH ANSWERS

So, how many riddles with answers hard did you solve? please tell us in the comment box and SHARE these tricky riddles and survival riddles with your friends.