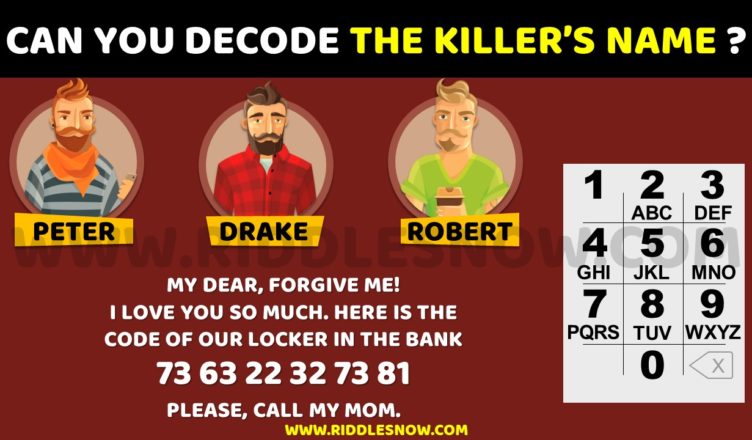 Boost your brain and improve logical thinking quickly with a set of 12 hard riddles with answers for crime experts! Logically brain exercises are great to improve your analytical skills. So be sure to solve these hard riddles every day to keep your mind sharp! Solve these amazing crime and detective riddles and share your answers in the comments:

Last night there was a Christmas party at the bar ‘Snowman’. By 2 pm all the alcohol had been finished and the visitors began to drift away. A group of friends said goodbye to Maya when she left. That was the last time anyone ever saw her. Her body has been found near the bar this morning. The police arrived at the crime scene. After examining the body, the detective interviewed three suspects: Ryan, Kylie, and Jack.

Ryan said: When she left, I went to the bathroom.

Kylie said: I ordered one more beer at the bar.

Jack said: I was talking to the girl, I had just met.

Answer: The killer is Kylie because there was no alcohol left at the bar, so Kylie could not order a beer.

Mr. Richard was very rich. He lived in a luxurious house with his young wife and servants. In late Autumn, the police received a call from his maid. She found him stabbed in the bedroom. The detective arrived at the crime scene. He determined that there were 3 people in the house at the time of the murder.

The Cook said: I was preparing dinner.

The maid said: I was cleaning the dining room after lunch that Mr. Elliot and his wife had.

The wife said: I was swimming in the pool after lunch.

Answer: The killer is Wife because she could not swim in the pool in late Autumn, as it was already drained.

Chris came back from work a bit earlier today! He was excited to see his wife earlier! As soon as he entered his bedroom, he saw a man jumping over the balcony. He realized that his wife was cheating him. He shouts on that man “BASTARD! I WILL KILL YOU” and chased him. After going a little further, he sees three men sitting on a bench and gets confused as to which of these three, who is his wife’s lover. Now it’s your turn to help Chris to catch his wife’s Lover.

Who is his wife’s Lover?

Answer: The lover is a middle man because in a hurry, he is wearing a t-shirt from the wrong side, see the tag and he does not wear a shoe in his right leg.

Molly was preparing the thanksgiving feast in her kitchen. An hour later, her friend found Molly dead. She immediately called the police. The officer identified three suspects:

The police also discovered that Molly had left three clues: a shoe, a slipper, and a glove to help identify the killer. The officer asked the suspects to put down what they were doing at the time of the murder. Soon the police found out who did it.

Answer: The killer is Adam because there were the left shoe, glove, and slipper. Mary tried to show that the killer was left-handed.

Maria and Diego have a country villa. Every year they throw a wedding anniversary party. This year they invited many relatives and friends. Maria and Diego were very happy to see them. But in the evening there was an incident. Suddenly the light went out, and they heard a woman’s cry: MY NECKLACE! IT’S BEEN STOLEN!

Who stole it? (see the picture carefully)

Answer: Did you identify that person? The man Second from the right side stole her necklace. See his coat’s pocket.

There was an earthquake in Greenview. After that, the police received a call.

A lady said: My husband is dead! He got crushed by a wardrobe during an earthquake! please come fast.

The police reach her house and investigate well.

The Lady says: When the quake hit, I was in the kitchen, and he was sleeping here. We had stayed at home because there was an earthquake warning yesterday. The wardrobe fell on him; He didn’t even get a chance to scream. I immediately called you!

The Police say: I think this is not an accident.

Why did he decide that? (see the image carefully)

Answer: Because she already knew about the earthquake, so she cut off the legs of the wardrobe before that. You can see the saw hidden under the bed.

There was a big storm Monday night. When Daisy didn’t come home. Her husband called the police. A famous detective arrived at their place. Daisy’s charred body was found outside the city in the meadow. It looks like she was killed by lightning. However, the autopsy showed they weren’t burns from electricity. It was a murder. The detective has three suspects:

Brian, her lover, and

I KNOW WHO KILLED HER, BUT I CAN’T TELL HIS NAME. I WILL GIVE YOU A HINT:

THAT DAY I SAW HER DRINKING SAMBUCA AND DANCING SAMBA IN A BAR.

The detective immediately arrested the murderer.

Answer: The killer is SAM. See the note carefully. The word “SAMBUCA” and “SAMBA”.

8. WHERE DOES SHE GET MONEY?

Erin has a husband and a lover. Both of them don’t give her money but buy expensive jewelry for her but Erin always has a lot of cash and both men see her wearing the jewelry.

Where does she get the money?

Answer: She asks them to buy her the same pieces of jewelry and takes one set to the store and sell them.

9. WHO IS RESPONSIBLE FOR HER DEATH?

Alina is Erik’s wife. She has a lover named Frank.

Alina says to Frank: I’m Pregnant by you.

Frank says: I don’t need it, I’m leaving you!

Alina goes to the hospital for abortion but

The doctor says: Sorry, I can’t perform the abortion for you. So you should go to a private clinic.

Alina says: I have no money!

Jane tells Alina’s husband Erik everything. Erik gets angry and says to Alina: I know you have a lover! your sister told me. Take your stuff and get out of here!

Who is responsible for her death?

Answer: There are many answers of this riddle:

Some will say, the sister because if she would have not told it to Erik, and not given her the money, Alina would not have committed suicide.

Some will say that It’s Alina’s fault because she committed suicide.

but what you think please tell us your answer in the comment box below.

Jane was found in her house lying in the center of a pentagram. The police questioned three people they found in her recent calls.

Jane’s brother: I have called her in the morning. She was depressed because she had been fired.

Jane’s Neighbor: She borrowed a pretty sum of money from me and called to ask for more time.

Jane’s Boss: She didn’t show up to work for a few days. I have called her to ask if anything happened.

Answer: Jane’s brother is lying because he said that Jane was depressed because she had fired from work. but her boss said he hadn’t seen Jane in her office. So, the liar is Jane’s brother.

All drivers of public transport went on strike and life in the city stopped. In one of the schools, The children found their teacher Mrs. Jennifer dead. Mrs. Jennifer’s son went to the same school. All children were jealous of him because his mother always gave him excellent grades. The detective arrived at the crime scene to interrogate all of Mrs. Jennifer’s students.

Mike: I was in the cafeteria.

Jude: I was saying goodbye to my parents in the schoolyard.

Mary: I went to the bathroom.

Alex: I was on my way to school on the bus.

Anna: I was in the schoolyard playing with my bear.

Answer: The killer is Alex. All drivers were on strike, so there weren’t any buses. She is lying.

Katie was robbed and killed by her neighbor. He came to her house, took all her valuables and money, and decided to get rid of Katie so that she wouldn’t rat him out.

and then the killer shoots her. After that, her husband reached the house and called the police. Husband read the note and says: So weird, we have no locker…

Police say: There are no signs of a break-in. This must be one of your friends or neighbors. Do you suspect anyone?

Police say: I will question them.

Peter: I have just returned from a business trip. Such horrible news!

Drake: I am shocked! at that time I was at mom’s.

Robert: So sorry for Katie. Today I was out at the county fair.

Katie’s husband was going to call her mom. He looked at the note again and suddenly realized who the murderer was.

Who killed his wife?

Answer: The killer is ROBERT. It was not a bank locker code. She encoded the murderer’s name.

So, how many hard riddles with answers did you solve? please tell us in the comment box and SHARE these brain teasers and riddles with your friends.